This is from Major Nelsons Page: Link

For one week only – from September 7 through September 13 – when you buy an Xbox One at participating retailers in the U.S., you’ll get a free Xbox One game of your choice. 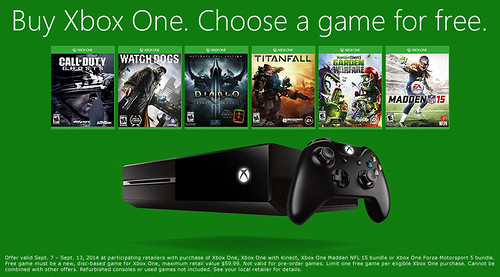 And it really is your choice: Whether you want to lock-and-load with your friends in Destiny  or Titanfall, face the legions of hell in Diablo III: Ultimate Evil Edition, hack the planet in Watch Dogs, or hit the sports arena of your choice in Madden NFL 15 or NHL 15.

This offer is valid for any retail Xbox One game, and the offer is good for our Xbox One system bundles, too – so if you want to pick up the Xbox One Madden NFL 15 Bundle or Forza Motorsport 5 Bundle, you’re getting another free game of your choice priced at $59.99 or lower on top of the bundled game.

Here’s the fine print: Offer valid September 7-September 13, 2014 at participating U.S. retailers with purchase of Xbox One, Xbox One with Kinect, Xbox One Madden NFL 15 bundle, or Xbox One Forza Motorsport 5 bundle. Free game must be a new, disc-based game for Xbox One, maximum retail value $59.99. Not valid for pre-order games. Limit one free game per eligible Xbox One purchase. Cannot be combined with other offers. Refurbished consoles or used games not included. See your local retailer for details.

I took  a small break from fun things and spent time learning some new skills.   I will be back to posting regularly on all things I care about…

First thing I am going to do is change the theme.  I would like most of the content to be available for each post when you get here.

Just wanted to give everyone an update on a few things.   The Totally party was a huge success,  we got a personal phone call from the head of PANCAN thanking us for the donations.   Thanks again to everyone that participated!

PurpleStride Cincinnati is quickly approaching.   I would love to have some people sign up to walk/run with us.   This event takes place Saturday Morning on the 27th of September.  This is a family friendly walk/run and a good time.   We are going to be pushing to raise $10,000, we are already halfway there!     Please let me know if you have any questions about the event or  PANCAN.

Most of this was taken from Major Nelson at: http://majornelson.com/2014/08/12/kicking-gamescom-2014-social-features-new-ways-watch-tv-usb-dlna-support-coming-soon/

Finally a console that will do native MKV,  this should be interesting.   I am still not happy about the lack of backwards compatibility on both consoles but this is a good start.

Getting everything ready for the party.   5:00 pm this Saturday at Bella Sala Hall.   Hope to see you there.